The DiMenna-Nyselius Library is open for current Fairfield University students, faculty, and staff only. To learn more about our resources and services, visit the link below

Why and When to Integrate Outside Sources

Why use outside sources in my writing?

As writers, we bring outside sources into our work to connect our arguments and explorations with ongoing dialogues among scholars and other audiences. These connections strengthen and broaden our arguments, grounding them in the conversations and issues that are important to specific communities. Ethical participation in a scholarly (or any other) discourse community requires that you give proper credit to authors whose words and ideas that you employ in your own writing. At Fairfield University, these values are embedded in our Honor Code and derive from the emphasis on mutual respect intrinsic to a Jesuit education more generally.

When to integrate sources

Authors engage with outside sources for a number of reasons. Sometimes we cite other authors when we want additional support for our own argument. Sometimes we respectfully disagree with other authors and argue against them. At still other times, we might be engaged in the mutual exploration of a topic, building and expanding on a scholarly or artistic conversation in which others are already participating. When we craft our own writing as a conversation, the points at which we quote, paraphrase, or summarize other sources are self-evident and grow organically from that engagement with outside voices. When we cite other sources merely to satisfy the requirements of an assignment or when we add quotations to an already fully formed argument, then those sources become disconnected from our own writing. Students often have the hardest time integrating sources when they have added them at the last minute; in the eyes of your readers, these hastily added sources will seem like afterthoughts or mere appendages to your own writing when they are not integrated as essential aspects of a scholarly conversation.

How to Integrate Sources

There are several ways in which to integrate sources into your own writing, and which method (or combination of methods) you choose will depend on multiple factors, including the ways in which you are using that source and the disciplinary conventions in which you are working. The three main methods of integrating sources are:

Broadly restating in your own language the main ideas from a text in a concise and coherent manner. The writer should echo the author’s main ideas and cover the broad concepts within a work, not just minor details or specific sentences/paragraphs. Think big picture. Summaries should boil down the work of others so that readers can easily digest information and get a general sense of the source being summarized. Typically in the sciences and social sciences, summaries should be cited in text and in your bibliography (see example below); in the humanities, cite directly if your summary does not already make clear which source that you are summarizing.

* Note that some differences exist when summarizing within certain disciplines. For example, summarizing within the sciences should be as concise as possible and done without any direct quotations. In other disciplines, concision is also valuable, but there might be more leeway for longer summarizing (for example, of a novel’s or short story’s plot) and more room for selective direct quotation. In all disciplines, though, remember that your summary should be no longer than is necessary to support the arguments or points about the text that you wish to make while not misrepresenting the meaning of that text.

* Established terminology in a discipline does not need to be cited; examples may include names of professions, time periods, understood acronyms, and other forms of disciplinary common knowledge.

In this article by Samuel and Shulman, the authors summarize the main arguments of three separate sources (listed below). They use Harvard style of citation, as required by the journal.

The association between lipids and insulin resistance is widely accepted. Early studies by Randle and colleagues in rodent heart and diaphragm muscle suggested that fatty acids impaired insulin-mediated glucose uptake in muscle by inhibition of pyruvate dehydrogenase, leading to reductions in glucose oxidation and accumulation of glycolytic intermediates (Randle et al., 1963). In rats, acute (<2 hr) lipid infusions decreased myocellular glucose utilization with the expected increases in intramyocellular glucose 6-phosphate (G-6-P) concentrations, as predicted by Randle's hypothesis (Jucker et al., 1997). Although this may hold true for acute experimental challenges, it does not explain insulin resistance in chronic disease states, which can be attributed to reductions in both insulin-stimulated muscle glycogen synthesis and glucose oxidation (Shulman et al., 1990).

2. For an extended example of a summary and a summary-plus-critique from the field of biology, click on the following link, which includes examples reproduced from:

Restating a passage from a text in an original manner. While similar to summarizing, paraphrasing differs in that attempted paraphrasing offers detail from specific portions of text. Paraphrases are most often shorter than original passages. Paraphrases need to be cited both in-text as well as in reference lists.

1. The following example from Muhlenberg College's Psychology department provides good (as well as inappropriate) examples of paraphrasing in APA format. 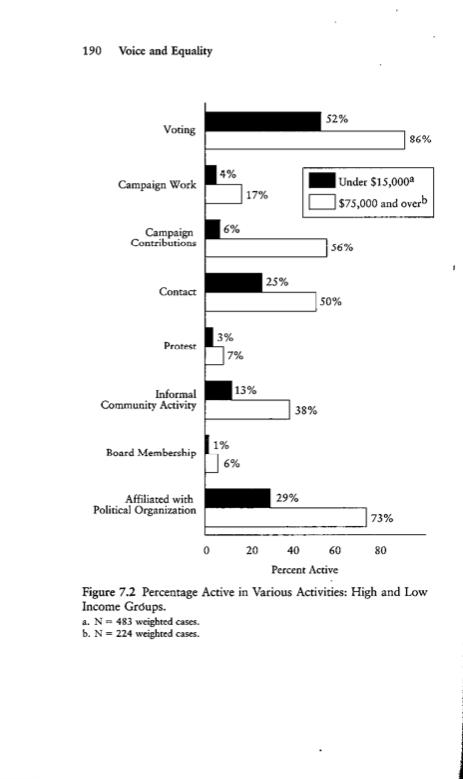 (This is an example of good paraphrasing because it captures one aspect of the chart and restates its conclusions in language that the average reader can understand.)

Direct Quotation is using the exact language from the original passage, word for word. Quotation marks must surround the quoted passage and the text within them must be reproduced verbatim—exactly as they appear within the original source. An exception to this rule is when you elide [omit] any language in the middle of a quotation, in which case you would designate the omission by using ellipses [. . .]—often set off within square brackets to distinguish ellipses original to the quoted text from those that you insert. Other alterations to the original text within a quotation should also appear in square brackets—such as when you need to add or change a word for clarity, or when you edit the spelling or typography of a word to conform with your own sentence or paragraph. Direct quotations must have an in-text citation in addition to an entry in your bibliography.

How (and When) to Quote Directly

In “The Cask of Amontillado,” the narrator reveals his true feelings toward Fortunato when he confesses the following: “It must be understood that neither by word nor deed had I given Fortunato cause to doubt my good-will. I continued, as was my wont, to smile in his face, and he did not perceive that my to smile now was at the thought of his immolation” (Poe 67).

This quotation is integrated into the text: the source is clearly identified and the author explains and analyzes the quoted text that follows. The author quotes the source text verbatim and uses correct MLA style in-text citation.

Integrating sources into your writing is foremost a matter of making them an important part of your composition process. That is, you should be engaging with the sources from an early stage in your writing, creating an organic dialogue between you and the authors with whom you converse. To make the connections between your sources and own writing apparent to your audience, be sure to indicate clearly and explicitly the links between direct quotations or paraphrasing and your own language. A number of online sources provide guidance on how to draw these connections, and a few particularly useful ones are highlighted below. In general, though, remember that quotations do not speak for themselves; you need to make clear to your readers who is speaking in a quotation, from which source the quotation comes, and why you are employing it (that is, how you are using it).

Here are some online sources that provide examples and guidance on how to integrate quotations into your own writing:

Other Resources Used in Creating This Guide

For more examples and information on how to format your paper: