Past FUAM Exhibition-By Design: Theater and Fashion in the Photography of Lalla Essaydi

All patrons are welcome to view this this guide. Only Fairfield University students, faculty and staff are able to view some of the links & resources remotely by authenticating with a current NetID.

By Design: Theater and Fashion in the Photography of Lalla Essaydi 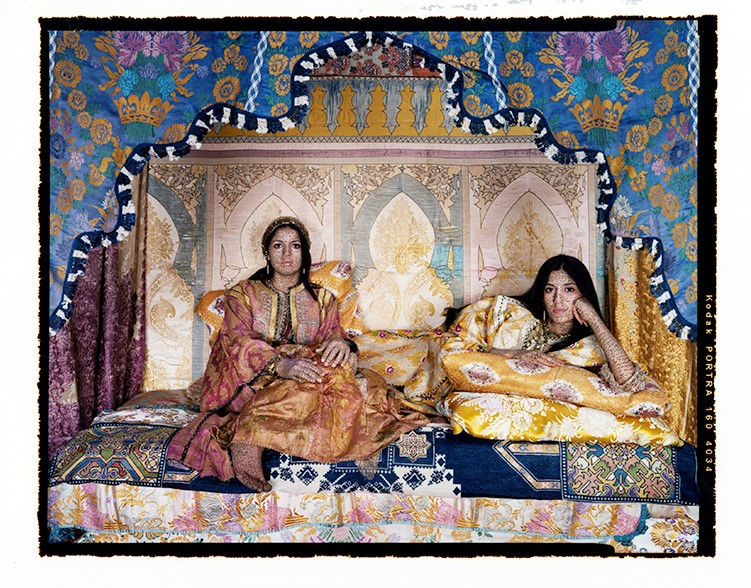 By Design: Theater and Fashion in the Photography of Lalla Essaydi explores the artistic process behind the creation of Essaydi’s carefully staged photographs, which deconstruct and reimagine stereotypes of Muslim womanhood. Guest Curator Cynthia Becker (Associate Professor in the History of Art & Architecture Department at Boston University) has selected approximately 20 works spanning Essaydi’s career for inclusion in this groundbreaking exhibition. Becker notes that, “This is the first time an exhibition has emphasized fashion and staging in Essaydi’s work ...[she] might spend months creating a single garment to be worn in one of her carefully crafted tableaus. She spends hours arranging her models and, in the process, recreates the familial bonds so important to Moroccan women’s lives.”

Born in Morocco, Lalla Essaydi lived in Saudi Arabia for many years and studied painting and photography at the École des Beaux-Arts in Paris and the School of the Museum of Fine Arts in Boston. She currently lives between New York and Morocco. Her time in Morocco also exposed her to the nation’s rich history of architectural design and the ceremonial occasions so important to daily life, both of which are featured in her photographs.

The exhibition will include works from Essaydi’s most important series created over the last twenty years. In her Harem series from 2009, Essaydi photographed women inside a lavish Moroccan palace known as Dar el Basha. She created original Moroccan-style garments for her female models that recreated the intricate mosaic and carved wood patterns that decorated this historically important structure. Lalla Essaydi embraced fashion again in her Harem Revisited series (2012-2013), using antique Moroccan dresses borrowed from the collection of Nour and Boubker Temli. With her series Bullets and Bullets Revisited (2009-2014), Essaydi crafted a richly detailed scene of highly ornate tiles, woodwork, and clothing out of bullet casings. In these glittering photographs, Essaydi comments on the violence that many associate with contemporary Middle Eastern and North African countries. Ironically, Essaydi transformed bullets into sparkling garments and intricate backdrops so that they are no longer recognizable as weaponry, illustrating the sense of tension and ambiguity that makes her photographs so compelling.

This exhibition provides a unique opportunity to appreciate Essaydi’s Moroccan-inspired fashion sense and unique theatrical skills. The works, some of which are very large scale, will be presented in the museum’s Walsh Gallery, and will be accompanied by a full array of complementary programming.

An essential academic and cultural resource for students, faculty, and residents of the surrounding geographic community and region, the Fairfield University Art Museum (FUAM) offers meaningful opportunities for first-hand experience of original works of art and their unique historical resonance. We foster appreciation of the visual arts; cultivate cultural literacy and critical engagement; conserve, research, and impart knowledge about the collection in accordance with best scholarly and museum practices; and champion human creativity of all cultures and time periods.

See the FUAM exhibition website to browse the featured artwork, and listen to the audio guide. Programming is also listed.