Learn how to incorporate copyrighted materials appropriately into research. 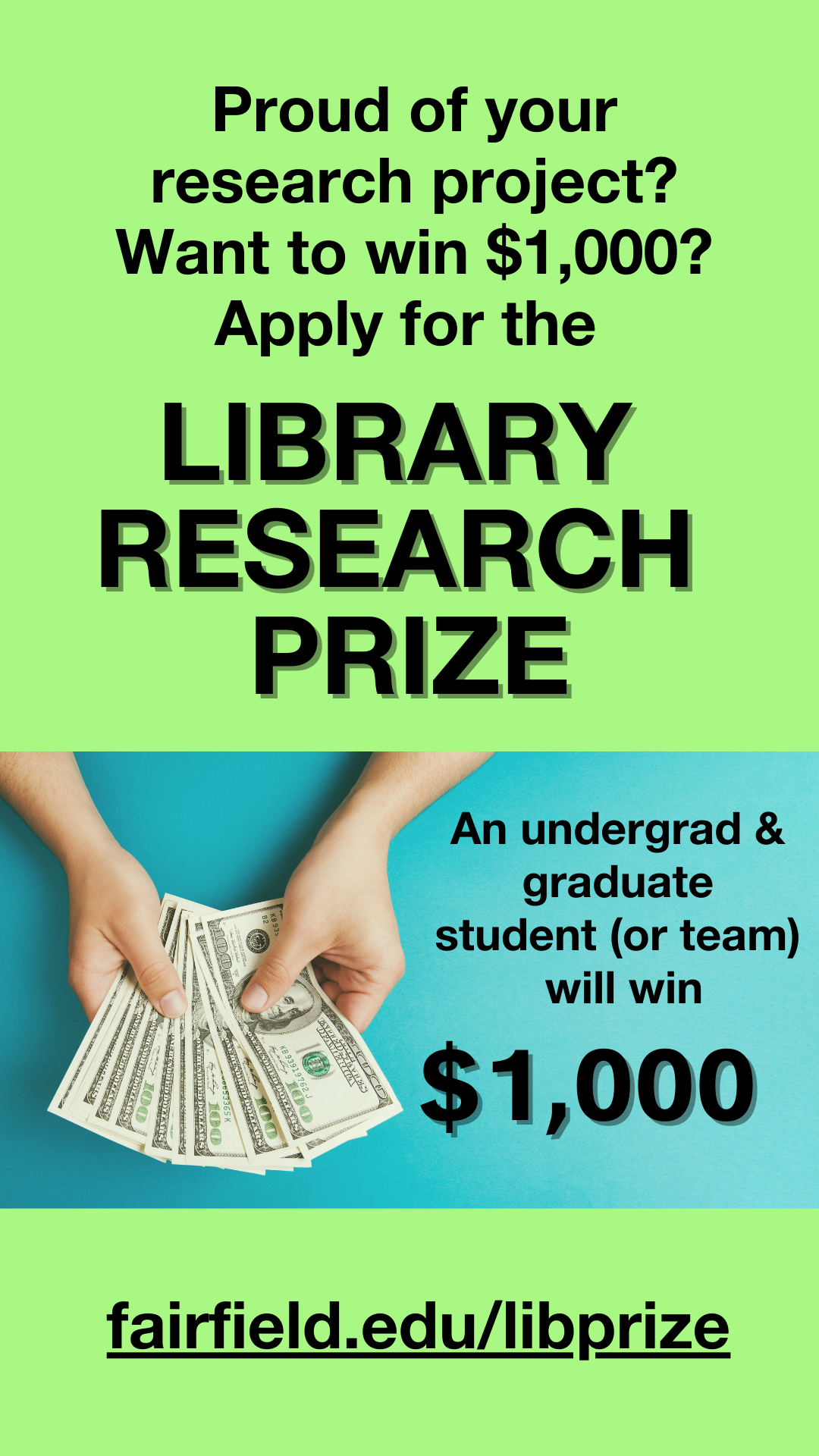 Introduction to this Guide

This guide is designed to help you successfully incorporate dynamic and appropriate multimedia into your research and community endeavors. Beyond, you will find pages with helpful resources for finding various types of media and information about how to properly credit the use of media within your work. Not sure if you can use an image or video that you find? Ask your professor or one of our librarians before you do!

According to Fairfield University's Mission statement, our "primary objectives are to develop the creative, intellectual potential of our students, and to foster in them ethical and religious values and a sense of social responsibility."

If faculty and staff have questions regarding copyright, the Library can provide assistance:

The Library is not able to:

Specific questions about usage of copyrighted material should be directed to University counsel, in the President’s Office.

What is Fair Use? If you want to determine whether you have the right to use a copyrighted work, ask yourself questions about your intended use of the material. The text below is directly from the Copyright Law of the United States of America.

Notwithstanding the provisions of sections 106 and 106A, the fair use of a copyrighted work, including such use by reproduction in copies or phonorecords or by any other means specified by that section, for purposes such as criticism, comment, news reporting, teaching (including multiple copies for classroom use), scholarship, or research, is not an infringement of copyright. In determining whether the use made of a work in any particular case is a fair use the factors to be considered shall include—

(1) the purpose and character of the use, including whether such use is of a commercial nature or is for nonprofit educational purposes;

(2) the nature of the copyrighted work;

(3) the amount and substantiality of the portion used in relation to the copyrighted work as a whole; and

(4) the effect of the use upon the potential market for or value of the copyrighted work.

The fact that a work is unpublished shall not itself bar a finding of fair use if such finding is made upon consideration of all the above factors."

To keep up on the current legal aspects of Fair Use, see Stanford University's Fair Use page 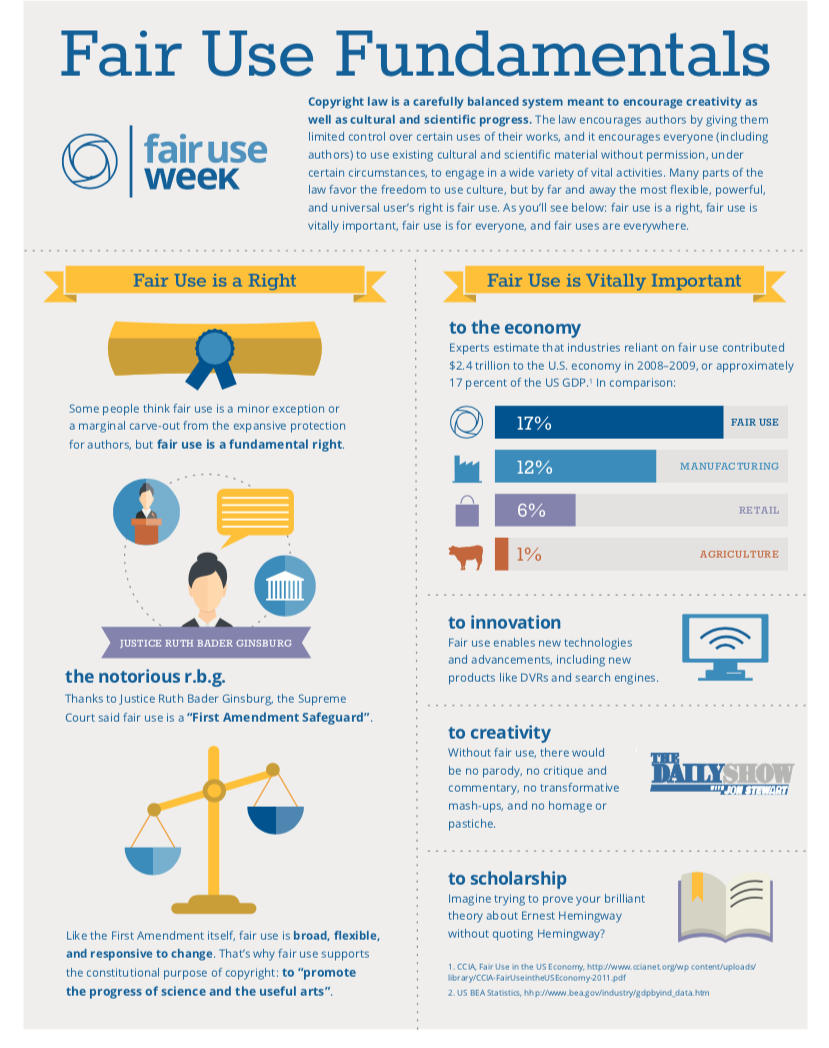 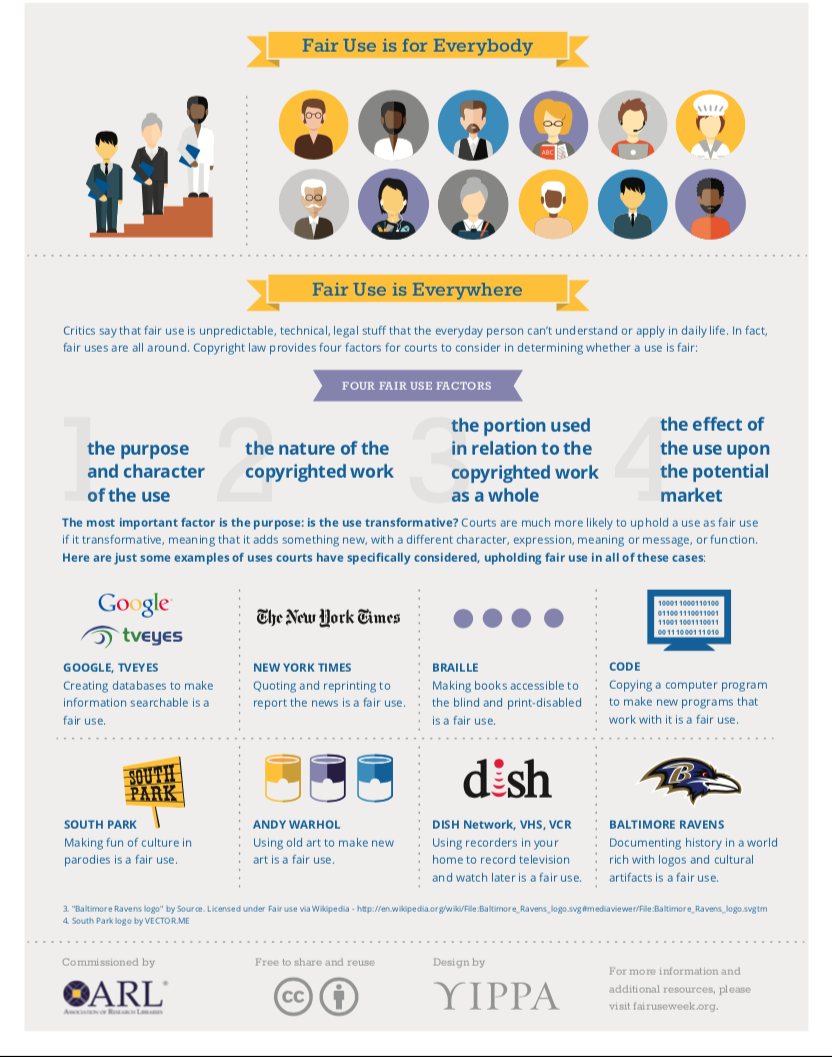 Film Screenings for Clubs and Classes

Guidelines for Using Films & Other Media in the Classroom

We get asked this all the time so here's a simple answer- Yes, you can show films, movies, documentaries, tv episodes in your classroom so long as you follow a few easy steps.

Guidelines for Film Screenings Outside of the Classroom

When you want to show a film, video, or television program at a group or club activity, at an organization event, or as a training exercise, you have to consider the rights of the those who own the copyright to the work you want to use. This consideration must be made regardless of who owns the video or where you obtained it. Copyright owners have certain rights, which are commonly known as public performance rights (PPR).

What are public performance rights?

PPR are license agreements made with a film's rightsholder granting an individual or a group the legal right to publicly screen a film. Usually a PPR license is purchased for a fee, and it usually only covers a one-time screening of the film.

When is a performance considered "public?"

A public performance is one that is "open to the public or at any place where a substantial number of persons outside of a normal circle of a family and its social acquaintances is gathered." (17 USC 106)

This includes any screening outside of the regular curriculum in the classroom, such as showing films for extracurricular events, or sponsored events by a center, club, or organizations.

Do I need to acquire PPR to show a film in my class?

In most cases, no. If you are showing a film in class as part of the curriculum, then you do not need to acquire PPR as per 17 USC 110.

The film I want to show is on Netflix. Can I stream this through my Netflix account in the classroom?

Netflix allows one-time educational screenings of some Netflix Original documentaries. For more information, see Netflix's policy on Educational Screenings of Documentaries. Netflix has also made a selection of their documentary features and series available on their YouTube channel. Subscription services such as Netflix, Hulu, and Amazon have very detailed membership agreements that may forbid the streaming of subscribed content in a classroom or other public venue. When you agree to the terms of membership, you enter into a contract and the terms of that contract override any applicable exception in copyright. So, if the membership agreement with Netflix prohibits the showing of the film in a classroom, you are bound by the terms of that agreement even if the face to face teaching exception would otherwise allow it.

We encourage instructors who plan to show films as part of their class, particularly when the class is taught online, to investigate the availability of films through Netflix, Amazon, Hulu, and other subscription or short term rental streaming services and to require their students to access that content on their own through their own subscription or account, or contact the Library to see if we have a physical copy or if it available via our video databases.

I want to show a film outside of the classroom. I'd like to invite the university community and the public. What do I need to do?

You will need to acquire public performance rights in order to legally screen the film. Even though this is for educational purposes, taking the film out of the classroom setting and inviting guests other than your students qualifies your film as a "public performance". (Fair use covers film use in face-to-face classroom and some distance learning settings.) However, if the title exists in one of our video databases, then you don’t have to worry. Most titles in those collections come with PPR, as long you don’t charge any admission.

I'm a student and my club or organization wants to show a film. What do I need to do?

You will need to acquire public performance rights in order to legally screen the film. The showing of a film as part of a film series is viewed as entertainment even if hosted or sponsored by an educational group or club. No matter how educational the setting or how tied to the curriculum, this is generally considered not to be fair use and PPR must be obtained. However, if the title exists in one of our video databases, then you don’t have to worry. Most titles in those collections come with PPR, as long you don’t charge any admission.

How much do public performance rights usually cost?

How do I acquire public performance rights?

Generally speaking, PPR can be purchased through a film's distributor. There are several large movie distributors and public performance rights licensing agencies that own the rights to hundreds of well-known films.

Information about PPR for Titles in our Video Databases

"Kanopy videos can be watched by any and all authorized viewers, whether in a group or individual viewing context.

Viewing films in a group forum is permitted for all films for classroom viewings, and most films for non-classroom group settings as long as the viewing is by authorized viewers and it is not for commercial benefit (i.e. no admission costs are charged and no profit is made from the screening)."

"Excluding the Film Platform collection, films available in Academic Video Online include limited public performance rights, which includes permission for classroom showings, as well as public screenings, as long as no admission is being charged."

"INSTITUTIONAL USERS may screen the streaming services within the INSTITUTION for

educational purposes and for the purpose of lectures. Any further use of the streaming services,

in particular, but not limited to the public performance of the streaming services (e.g. public

screening on the premises of the INSTITUTION) is prohibited."

Each play includes production enquiry information on who owns rights for the play and how to contact them.

"The MOoD and its content may only be used by authorized users for noncommerical private viewing by means of streaming through the MOoD service. Public performance or commercial use (including displays, performances, reproductions and distributions) of MOoD and its content, in whole or in part, are strictly prohibited.

No uses other than expressly provided for herein are permitted. Without limitation Licensee shall ensure that Authorized Users do not:

(a) Use MOoD, or use, display or make performances with, reproduce or distribute any Content from MOoD, for any commerical purpose whatsoever, including but not limited to public performance of the Contetn whether or not a fee or admission is paid by any attendee."

Broadcast Music, Inc represents over 350,000 creators of music, the songwriters, composers and publishers of more than 6.5 million musical works

American Society of Composers, Authors, and Publishers (ASCAP) licenses the right to perform songs and musical works created and owned by the songwriters, composers, lyricists and music publishers who are ASCAP members and also those members of foreign performing rights organizations who are represented by ASCAP in the United States.

Criterion Pictures USA is one of the largest non-theatrical providers of feature films in North America. In the United States, Criterion has exclusive relationships with some of Hollywood's largest film Studios, such as Paramount Pictures (select titles only), 20th Century Fox, Fox SearchLight, DreamWorks Animation, Troma Films, and New Concorde, among others.

Motion Picture Licensing Corporation is an independent copyright licensing agency that provides the Umbrella License to ensure copyright compliance for the public performance of motion pictures.

Still not finding what you need? A Librarian is available to help! 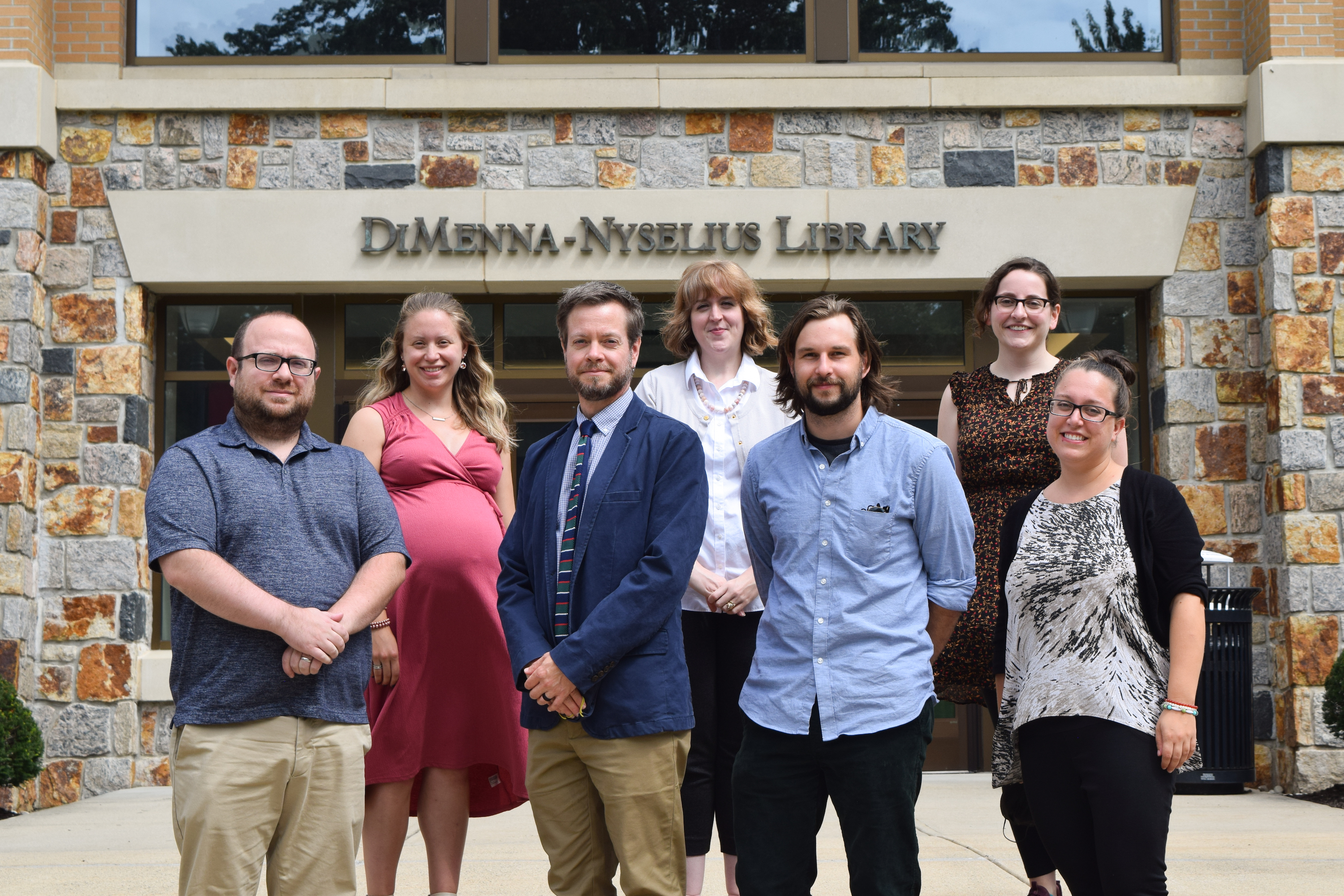