You can search for primary sources in the catalog by searching for keywords such as:

Tip: Combine them with a keyword related to your topic, such as civil war AND letters.

Irish Immigration in the United States: Immigrant Interviews
E184.I6O4 1969
Reprint of a 1864 book of inteviews with Irish immigrants.

The world of Mexican migrants : the rock and the hard place
E184 .M5 H385 2008
Interviews and personal narratives of Mexican immigrants.

Words of the uprooted : Jewish immigrants in early twentieth-century
E184.J5 W885 1998
From the series, Documents in American social history.

100 Key Documents in American Democracy
Ref. E173.A15 1994
Includes several documents related to class, race and religion. The collection was created with awareness of the importance of sexual and racial inclusion.

The Annals of America
Ref. E173.A793
Includes a lengthy introduction, chronology, and maps. Documents range from reports to songs to opinion pieces to Supreme Court rulings.

Rank and File: Personal Histories by Working-Class Organizers
HD8072.L883 1974
Leaders of rank-in-file movements from the 1930's to the present record their ideas and experiences.

American Memory http://memory.loc.gov/ammem
A growing collection of primary resources collected by the Library of Congress.

Google Book Search - http://books.google.com/advanced_book_search
Use the advanced search and limit your search to the years that you are researching.

Google News Archive - http://news.google.com/archivesearch
Contains some digitized historical newspapers.  Important note: Do not pay for any articles!  If you need an article that is unavailable and you cannot find it through the library's databases, please contact a librarian.

In the First Person http://www.inthefirstperson.com/
Indexes oral history collections in English from around the world. Contains pointers to audio and video files, full text, and bibliographic records. With future releases, the index will broaden to identify other first-person content, including letters, diaries, memoirs, and autobiographies, and other personal narratives.

Regional Oral History Office - http://bancroft.berkeley.edu/ROHO/
"ROHO conducts, teaches, analyzes, and archives oral and video history documents in a broad variety of subject areas critical to the history of California and the United States. ROHO provides a forum for students and scholars working with oral sources to deepen the quality of their research and to engage with the theory, methodology, and meaning of individual testimony and social memory."

StoryCorps http://www.storycorps.net/
StoryCorps is an independent nonprofit project whose mission is to honor and celebrate one another’s lives through listening. Usually a pair of people enter a StoryCorps booth and record their conversation. These are (usually) ordinary people recording primary source material from their lives. Website is searchable.

United States Historical Census Browser - http://fisher.lib.virginia.edu/collections/stats/histcensus/
Uses US Census data that allows you to create datasets and view maps based on ethnicity/race/place of birth, family size, and slave population.

You can search for primary sources in databases by searching for items such as: 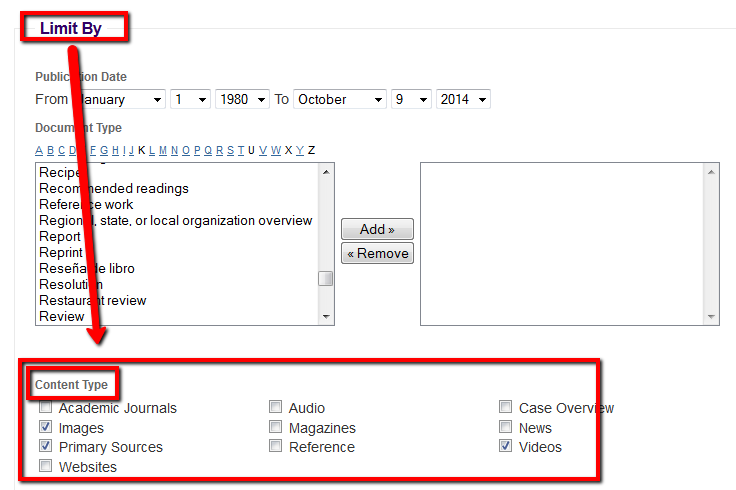